Playing and Praying? Sport and Religion in Britain Today

The Centre is pleased to announce this event is taking place in Cambridge as part of the CAmbridge Festival of Ideas 2014:

Sport is often talked about as a “religion” and large sporting events as popular rituals where personal devotion and group identity merge a mass of collective emotion. Sport and religion are not the same thing, of course, but there are interesting parallels between the two. Both athletic prowess and some forms of religious life seem to depend on the regular and conscious disciplining of body and mind. And elite athletes – with their celebrity status and media coverage – are increasingly bringing religion into the public domain, praying in public and thanking God for their sporting victories. This panel will explore the ways that sport, faith and society interact in Britain today. What role does faith play in the sporting lives and motivations of elite athletes, particularly from religious minorities, and how do sport and sporting heroes shape the face of religion and relations between faiths in Britain today? 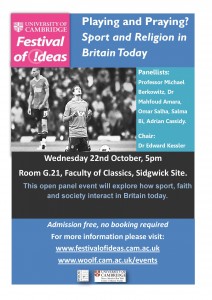