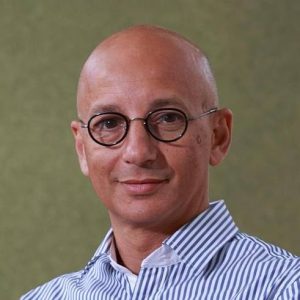 Professor Khaled Fahmy (currently on sabbatical) is the Director of the Centre of Islamic Studies, His Majesty Sultan Qaboos Bin Sa’id Professor of Modern Arabic Studies, and a Fellow of King’s College, Cambridge. He is a historian of the modern Middle East, with a specialty in the social and cultural history of nineteenth-century Egypt.

Born and raised in Egypt, Fahmy studied economics for his BA, and then political science for his MA, both degrees he received from the American University in Cairo (AUC). He then went to the University of Oxford where he wrote his DPhil dissertation on the history of the Egyptian army during the first half of the nineteenth century. After receiving his doctorate in 1993, Fahmy moved to the US where he worked first at Princeton University then at New York University. After seventeen years in the US, he returned to his home country in 2010, and joined his alma mater, AUC, as chair of the Department of History. In 2013, Fahmy returned to the US, this time as a visiting fellow at Columbia University, then as a visiting professor at Harvard University. He joined the University of Cambridge in 2017.

His research focuses on the social and cultural history of the modern Middle East, with a particular focus on nineteenth-century Egypt. He has written several books including a revisionist account of the army of Mehmed Ali Pasha (‘All the Pasha’s Men: Mehmed Ali, His Army, and the Making of Modern Egypt’), a critical biography of this towering nineteenth-century personality (‘Mehmed Ali: From Ottoman Governor to Ruler of Egypt’) and ‘al-Jasad wa-l’Hadatha (The Body and Modernity)’, a collection of scholarly articles that deal with the history of the disciplines and practices of medicine and law in nineteenth-century Egypt.

Fahmy’s most recent book, In Quest of Justice: Islamic Law and Forensic Medicine in Modern Egypt, provides the first full account of the establishment and workings of a new kind of state in Egypt in the modern period. Drawing on groundbreaking research in the Egyptian archives, In Quest of Justice shows how the state affected those subject to it and their response. It also illustrates how shari’a was actually implemented, how criminal justice functioned, and how scientific-medical knowledges and practices were introduced. In early 2020 this book won the Social History Society Book Prize for the best book in social history.

You can watch an interview that Khaled had with Prof. Naomi Tadmor, the Chair of the Social History Society, about the book:

The history of the imaret of Mehmed Ali Pasha in Kavala: https://khaledfahmy.org/en/2021/11/07/an-egyptian-monument-in-greece-the-kulliyye-of-mehmed-ali-pasha-in-kavala/

The Body and Modernity: Essays in the history of medicine and law in Modern Egypt (in Arabic) Cairo: Dar al-Kutub (2004)

All the Pasha’s Men: Mehmed Ali, His Army and the Making of Modern Egypt Cambridge: Cambridge University Press (1997)

Opening politics’ black box: Reflections on the  past, present and future of the Egyptian  Revolution Raja Shehadeh and Penny Johnson (ed.) Shifting Sands: The Unravelling of the Old Order in the Middle East pp. 69-81 (2015)

The birth of the secular individual: medical and legal methods of identification in 19th-century Egypt Keith Breckenridge and Simon Szerter (ed.) Registration and Recognition: Documenting the Person in World History pp. 335-356 (2012)

The responsibility of Arab governments in the war on Iraq Müge Gürsoy Sökmen (ed.) World Tribunal on Iraq pp. 108-113 (2008)

For Cavafy, with love and squalor: Some critical notes on the history and historiography of modern Alexandria Anthony Hirst and Michael Silk (ed.) Alexandria, Real and Imagined pp. 263-280 (2004)

Prostitution in nineteenth-century Egypt Eugene Rogan (ed.) Outside In: On the Margins of the Modern Middle East pp. 77-103 (2002)

Medical Conditions in Egyptian Prisons in the Nineteenth Century Robin Ostle (ed.) Marginal Voices in Literature and Society: Individual and Society in the Mediterranean Muslim Worldpp. 135-153 (2000)

Medicine and Power: Towards a social history of medicine in nineteenth-century EgyptCairo Papers in the Social Sciences, Volume 23, No. 2 pp. 1-45 (2000)