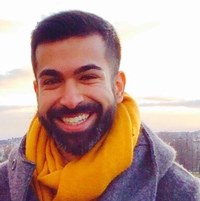 Taushif Kara is a PhD candidate in the Faculty of History at the University of Cambridge. His doctoral research focuses on the intellectual history of the Khoja diaspora around the Indian ocean world (ca. 1866 – 1972). Before coming to Cambridge, he studied Islamic history and philosophy at the Institute of Ismaili Studies in London and served as a Teaching Fellow in the Department of Religions and Philosophies at SOAS. He is a producer for the Interventions podcast and a former convenor of the Cambridge World History Workshop.

Taushif’s research, under the supervision of Prof. Sujit Sivasundaram, focuses on the intellectual history of the Khoja diaspora around the Indian ocean world. With their migration to eastern Africa in the nineteenth century as a vantage point, he situates the Khoja and their ideas within and against broader developments in African, Muslim, and Indian political thought during the colonial moment. Drawing on a range of archives, he is studying key terms of belonging, politics, and community and in doing so try to displace standard narratives of colonial knowledge and sovereignty.

Paper 21: Empires and World History from the Fifteenth Century to the First World War

Paper 30: Islands & Beaches: The Pacific and Indian Oceans in the long 19th century

“Pray to the Archive: Abstracting History in Zanzibar,” International Journal of Islamic Architecture 9:2 (2020), special issue on Field as Archive/Archive as Field [forthcoming]