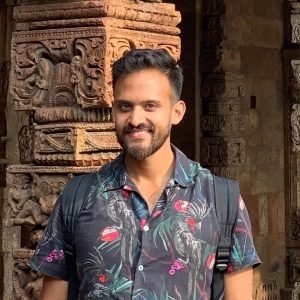 Vivek Gupta is an art historian of the Islamic, South Asian, and Indian Ocean worlds. His first monograph will be based on his PhD, Wonder Reoriented: Manuscripts and Experience in Islamicate Societies of South Asia (ca. 1450–1600), at SOAS University of London, History of Art (2020). His thesis offered the first full-length study of how the Islamicate cosmography transformed in South Asia through an analysis of roughly fifty illustrated manuscripts.

Gupta’s educational and professional background spans the US, UK, India, and Egypt, and art historical and philological training. From June to November 2019, he held a research placement at the British Library on illumination in Persian manuscripts. He was Assistant Curator/Fellow for Islamic and South Asian Coins (2016-17) at the American Numismatic Society in New York. In 2017, he curated the numismatic section for the National Museum of Qatar’s inauguration. He has been working on Deccan art since 2012-13 when he served as a research assistant in Islamic Art at the Metropolitan Museum of Art for the exhibition, Sultans of Deccan India, 1500-1700. In 2014, he had a Smithsonian Fellowship at the Freer|Sackler Galleries to work on the Freer Ramayana as well as the Hindi poetry and manuscripts of ‘Abd al-Rahim Khan-i Khanan.

Gupta earned a BA in Arabic and Comparative Literature at Washington University in St. Louis during which and after he lived in Egypt and worked on Modern Arabic Literature under the supervision of Professor Mohamed Salah Omri (Oxford). He completed his PhD in History of Art from SOAS, University of London under the supervision of Professor Scott Redford.

Since 2020, Gupta has collaborated with the Deccan Heritage Foundation and HH Sri Srikantadatta Narasimharaja Wadiyar Foundation, Mysore, to produce the international webinar, From Konkan to Coromandel: Deccan Heritage, Art, and Culture. The focus of this scholarly engagement has been to make new research on the Deccan freely available to a global public. It seeks to bring together research on both the Northern and Southern Deccan regions of India cutting across Hindu, Muslim, Jain, and Buddhist material cultures.

At Jesus College’s West Court Gallery, Gupta has curated Shahzia Sikander: Unbound, which features an outdoor sculptural installation and new paintings in response to the collection of the Fitzwilliam Museum. He is also on the Committee of the Intellectual Forum.