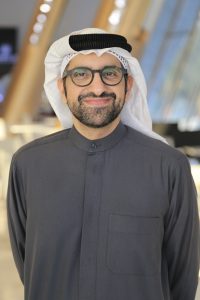 Sultan Sooud Al Qassemi is a United Arab Emirates-based columnist whose articles have appeared in The Financial Times, The Independent, The Guardian, The Huffington Post, The New York Times Room for Debate, Foreign Policy, Open Democracy, and The Globe and Mail, as well as other notable publications.

Sultan is also a prominent commentator on Arab affairs on Twitter. Rising in prominence during the Arab Spring, his tweets became a major news source, rivaling the major news networks at the time, until TIME magazine listed him in the “140 Best Twitter Feeds of 2011.”

Sultan was an MIT Media Lab Director’s Fellow from 2014-2016, and in the Spring of 2017 Sultan was a practitioner in residence at the Hagop Kevorkian Center of Near East Studies at New York University, where he offered a special course on Politics of Middle Eastern Art.

Sultan is also the founder of the Barjeel Art Foundation, an independent initiative established to contribute to the intellectual development of the art scene in the Arab region by building a prominent and publicly accessible art collection in the United Arab Emirates.

Sultan continues to write and tweet about the Arab world from his home in Sharjah, and also while giving lectures internationally.

In this talk, UAE based writer and art collector Sultan Sooud Al Qassemi will be discussing the political undertones of iconic artworks of the 20th century in the Arab world. From the Baathist regimes of Syria and Iraq to Egypt’s pan-Arabism under Gamal Abdel Nasser, paintings and sculptures in addition to film and performance have been employed by various governments as a tool of soft power to propagate their policies to the public not only in their respective states but throughout the region and beyond. Despite this government patronage of the arts, many artists have chosen to challenge their authorities through their art practices. This talk is an attempt to shed light on an often neglected dimension in the modern history of the Arab world, and other parts of the Middle East.

Free and open to all.