Summary of the research project

The research was guided by a primary research question:

To what extent does ‘everyday’ hate crime and discrimination inform the daily lives of British Muslim communities?

In response to this question, the author adopted grounded theory and its principles of iterative analysis (see below). Consequently, subsequent research questions were added as theory emerged from the data:

To what extent do the theories of risk help aid our understanding of the types of hate crime and discrimination experienced by the research participants going about their everyday lives?

What role do the narrative constructions of resilience play in the wider narratives of victimization and discrimination shared by the research participants?

In total, sixty-three female and thirty-five male participants (ninety eight in all) agreed to attend one focus group each. Research participants were selected using a non-random sample, a recruitment strategy derived from convenience and snowball sampling, and with assistance from a number of key informants. Key informants here were individuals working within local community organizations connected to mosques or Islamic centres or engaged in the provision of services for a local Muslim community. Each discussion began with a brief introduction followed by a simple open-ended question related to the fieldwork location:

Topics raised and discussed included local, national and international issues although the conversations invariably centred on the localized risks of hate crime and discrimination. Further open-ended questions explored issues of victimization and discrimination among the participants’ families and friends, and local attitudes towards the police.

As states, analysis of the data was undertaken using methods and principles drawn from grounded theory. Grounded theory is an iterative approach to qualitative analysis that encourages researchers to induce theory from data, rather than test hypotheses (as in common in the natural sciences and experimental social sciences). Accordingly, the data were transcribed and coded. Data were visited and revisited, coded and recoded as theory emerged. These iterative processes were informed by theoretical sampling: here that meant focus groups data revealing narratives around risk, hate crime and resilience were used to guide subsequent focus group discussion and data analysis. Coding was used to label, separate, compile, and organize data. Whilst limited resources negated ‘theoretical saturation’, the point data no longer illuminate theories and concepts, the collected data and the emergent conceptualizations of risk and resilience were subjected to constant comparison and reflection in an attempt to strengthen the overall findings.

Many participants were keen to discuss the perceived role of the media in generating and maintaining the adverse social climate and conditions so often alluded to by the participants. Negative media descriptions of Muslims and Islam were described as being related both directly and indirectly to the victimization and discrimination reported during the focus groups. Some participants felt hurt by the negative media portrayals of Muslims and Islam (especially around the associations made in the media between Muslims and violence). Others felt that their risks of being targeted by acts of bigotry and inter-personal violence were increased when perpetrators had prejudicial or hostile views ‘justified’ by negative media reporting. Consideration of the role of newspapers, television news, and the internet as mediating technologies of risk and fear, and the multiple accounts of ‘everyday’ hate crime and discrimination in public places, led to the development of an ‘ecological perspective’ of social adversity informed by a theoretical framework reliant on the most recent iterations of Ulrich Beck’s risk thesis.

The study also revealed a surprising readiness amongst the participants to discuss strategies of coping that were described as operating at both the individual and community levels. These coping strategies were conceptualized as ‘resilience’ and the analysis drew from studies of resilience from field of social psychology. Some participants discussed resilience in terms of the role played by religious practice when forgiving a perpetrator of hatred or discrimination. Other participants described agency and resilience in terms of acts of ‘pre-emptive courtesy’ (for example, being polite to others on public transport in order to counter any feelings of awkwardness or hostility targeted towards the participant), or the reliance on strengthened community support networks (for example, mosques, community centres and more informal settings). Other participants described resilience in stronger terms: examples included answering back after verbal abuse or preparations being made by younger family members to defend themselves in case of physical attack.

Overall, the findings around resilience offer a counter-narrative to the dominance of victimization accounts that ignore or downplay the agency, choice and meaning-making engaged with during and after ‘everyday’ experiences of anti-Muslim hate crime and discrimination and in response to the risks generated and maintained by negative media depictions of Muslims.

The symposium programme is available here.

“The CASS ‘Hate Speech’ project team were invited on the 16th of June to present some of our findings at a Symposium on Anti-Muslim Hate Crime held at the University of Cambridge Centre of Islamic Studies. The Symposium was organised by Julian Hargreaves, a Lancaster University Law School PhD student and Research Associate at the Cambridge Centre.

The symposium brought together academics, community experts and civil society leaders in a unique event that allowed the sharing of knowledge, experience and expertise on the subject from a wide range of perspectives.

The first session of the day focussed on the research approaches and findings from three UK academic centres. Stevie-Jade Hardy from the University of Leicester’s Hate Crime Project isolated and shared some of the project’s key findings on experiences and impacts of hate crime for Muslims in Leicester. Sussex University PhD student Harriet Fearn discussed the early observations she had made in her research on the impacts of hate crime against Muslims on the internet.

Representing CASS and Lancaster University Law School, Paul Iganski and I then delivered a presentation of our work conducted with Jonathan Culpeper examining Crown Prosecution Service files from cases of religiously aggravated offences. In our paper titled ‘A question of faith?’, Paul and I explored the boundaries of free speech, the roles of religious identity and religious beliefs in the alleged offences committed, and the commonalities in the circumstances and contexts which surround offences prosecuted as religiously aggravated.

After lunch, the experiences of representatives from three community organisations confronting hate crime in Britain were shared with those present. Alice Purves gave a compelling account of the challenges faced by the Edinburgh and Lothians Regional Equality Council (ELREC). Jed Din, director of the Bradford Hate Crime Alliance then offered a personal account of the particular challenges of anti-Muslim hate crime and his own visions to develop community cohesion as a response. The session concluded with a presentation on anti-Muslim hate crime in Leicester from Jawaahir Daahir, CEO of the Somali Development Services.

The final session of the day, chaired by Paul Iganski, offered different approaches to documenting and responding to anti-Muslim hate crime. Shenaz Bunglawala, the head of research at MEND, shared insights and observations on the prevalence of anti-Muslim hate crime and attitudes to Muslims in Britain. The presentation included several of the key findings and observations from the research led by CASS director Tony McEnery on Representations of Islam in the British press. Those gathered then had the opportunity to hear from Hayyan Bhabha, the independent parliamentary researcher for the All Party Parliamentary Group on Islamophobia, who shared the latest developments in the work of the APPG and illustrated some of the evidence received or collated by the APPG. The final paper of the day came from Vishal Vora, from SOAS, with a perspective on indirect discrimination towards British Muslim women as a consequence of declarations of ‘non marriage’ by the English family court.

The symposium was a very successful event and Paul and I very much enjoyed contributing to the day. Thanks are due to Julian and to Louise Beazor for putting together a very interesting programme, bringing together a wide range of perspectives on an important social issue, and arranging a highly productive day for all in attendance.” 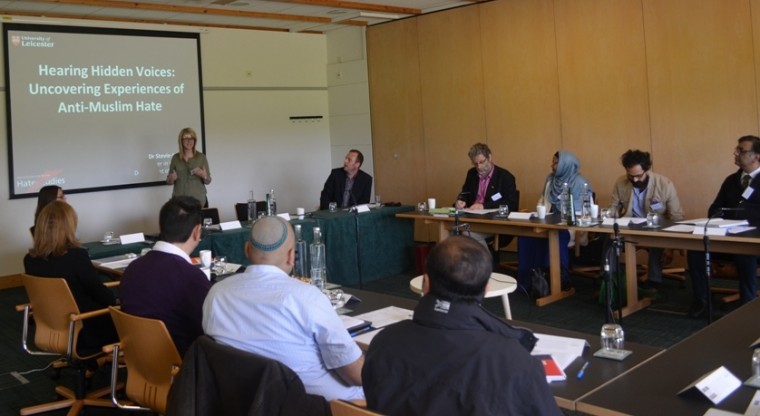 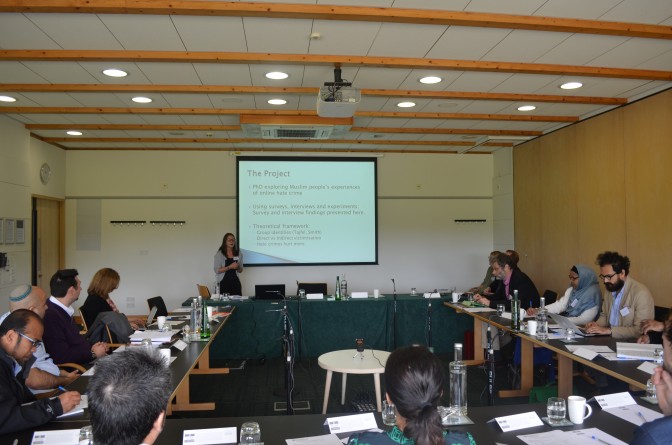 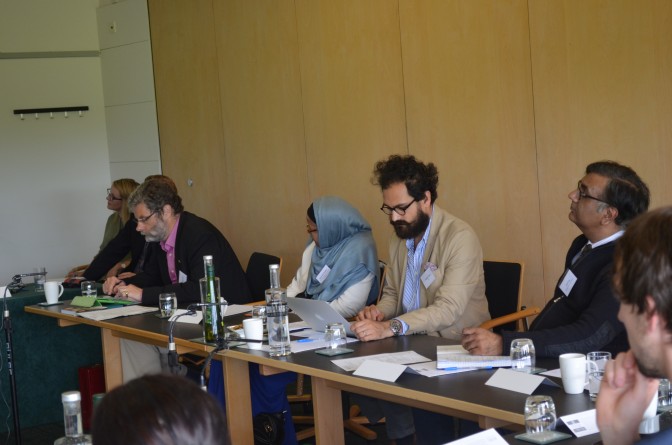 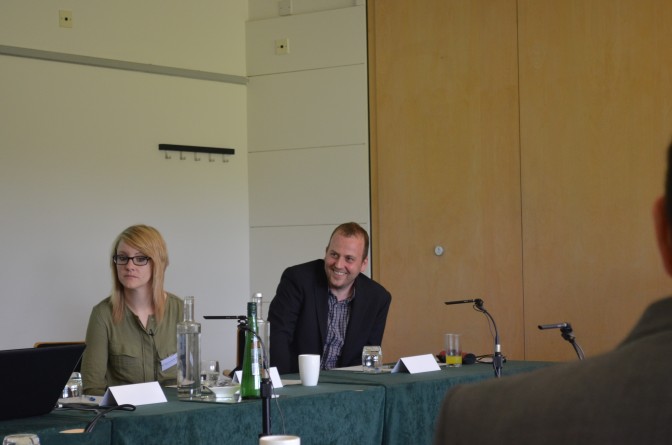