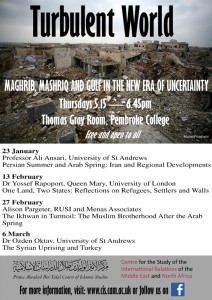 27 February
Alison Pargeter, RUSI and Menas Associates
The Ikhwan in Turnmoil: The Muslim Brotherhood After the Arab Spring

TURBULENT WORLD: MAGHRIB, MASHRIQ AND GULF IN THE NEW ERA OF UNCERTAINTY

As is often the case, the advent of the Arab Uprisings in 2011 was bathed – in the media and in Western academic circles – with a roseate glow and the belief that Arab exceptionalism had been shown to be a myth so that the Arab world would now enter into the generalised emergence of democratic governance worldwide.  There was, to be sure, a residual anxiety, as new governments began to emerge, that the challenge of political Islam as a new force shaping regional political dynamics might find democracy difficult to accommodate.  Confidence, however, was placed in the political maturity that such movements seemed to show, a confidence that was not dented by the sudden and unexpected emergence of a new gamut of Salafist movements and parties throughout the region.

In retrospect, of course, such sunny optimism was to prove to be misplaced.  Economic realities – in the midst of the worst financial crisis the world has known since the 1930s – have obtruded, wrecking the plans and expectations of the new governments that had emerged, despite high oil prices in the face of the shale revolution.   Some regimes, moreover, violently resisted the new democratic wave and global geopolitics, as ever, intervened, as Western suspicions of Iran, and of China and Russia behind it, trumped political realities, consigning Syria and the surrounding states to aggravated instability and suffering.  Regional tensions intervened, too, as the confrontation in the Gulf broadened out into a sectarian conflict pitting Sunni against Shi’a.  The role of the region as a ‘shatterbelt’ between East and West, in short, continued.

Meanwhile, observers – as is usually the case – seemed to have forgotten the old adage that revolutions often consume their children.  The failure of the Morsi presidency in Egypt underlined a fundamental contradiction in the Whiggist narrative of seamless democratic evolution; what happens when a democratically-elected movement loses popular legitimacy long before its term-in-office is ended and it is suspected of ambitions for democratic dictatorship instead?  Commentators also seem to have overlooked the vital role and obligation of the state in ensuring national security within the process of monitoring and guaranteeing political change, as the accelerating crisis in Libya underlines.  Nor do they seem to have anticipated the role that transitional justice (or vengeance) would play in the development of the new politics, despite the experiences of the waves of democratisation in Latin America and Eastern Europe in recent decades.

At the Centre for Islamic Studies (CIS-FAMES) and the Centre for the study of the International Relations of the Middle East and North Africa (CIRMENA – POLIS), we continue to monitor and comment upon the manifold uncertainties that confront the Arab world today.  We seek to engage the wider, interested audience throughout the University and beyond, through a series of fortnightly seminars which we encourage you to attend.  They are held between 5.15 pm and 6.45 pm on Thursdays at the Thomas Gray Room at Pembroke College. Do join us!

Refreshments will be served.
The event is free and open to all.