Narratives of Conversion to Islam in Britain: Male Perspectives 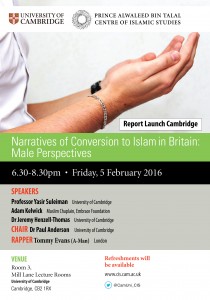 The launch discussed and reflected on the Centre of Islamic Studies’ research project on Conversion to Islam that focused on the experiences of nearly 50 British men of all ages, ethnicities, backgrounds and faiths (or no faith) – who have all converted to Islam.

More about the project:
Narratives of Conversion to Islam: Male Perspectives brought together forty-six male Muslim converts to discuss aspects of their conversions to Islam, to reflect on their journeys and experiences and to produce a report to inform Muslims and non-Muslims about the topic. The preliminary meeting (December 2014) commented on the widespread misrepresentations of male converts and shed new light on issues that have received little attention in the literature, such as how converts ‘learn Islam’, conversion in prison and radicalisation, the relations between converts and heritage Muslims, struggle with faith and exiting Islam. The voices of male converts are often unheard in contemporary debates about Muslims and Islam in the UK. Based on an extended set of conversations held at the University of Cambridge in 2014/5 with male converts to Islam, this project provides a platform for male converts from diverse socio-economic, geographical and denominational backgrounds to articulate their experiences and perspectives on matters they have identified as significant.

The project follows on from the huge success of the first report in the series, Narratives of Conversion to Islam in Britain: Female Perspectives (2013) and aims to go some way to fill the current gap in accessible, high-quality research on issues around male converts and conversion to Islam in the UK. The Male Perspectives report, published in February 2016, is available to download here.