Bringing together more than 300 scholars, policy officials and specialists, the Gulf Research Meeting took place at the University of Cambridge from Monday 14 August – Thursday 27 August 2015. In total, more than 350 participants took part in deliberations spread over 11 workshops dedicated to various aspects of Gulf development and strategic issues.

H.E. Dr. Abdullatif Rashid Al-Zayani, Secretary-General of the Gulf Cooperation Council, gave the keynote address at the opening session of the sixth annual Gulf Research Meeting by highlighting the turbulence that is impacting the entire Middle East region and he points out the current security challenges in the region that needs collaborative efforts to address and overcome. The Secretary General stated that the current instability in Yemen, Syria, and Iraq has direct implications on the gulf regional security. He expressed concerns over the nuclear agreement with Iran and emphasizes that any deal with Iran should take into account its constant interventions in the region and its regional aspirations as well. He was hoping that the nuclear agreement with Iran would lead to stability and safer region. Dr. Al-Zayani makes mention that the Saudi Arabia and the Arab alliance has supported the legitimate government in Yemen and states that the legitimate government in Yemen is in a dominant position. He elaborates on ISIS issue and how it requires concerted efforts to combat this organization and its extremism. He observes that we should educate our youth on what is right and what is wrong so that we can avoid breeding more extremists.

Al-Zayani points out that the late king Abdullah Bin Abdulaziz Al-Saud vision with regards to establishing international center for combating terrorism has been materialized through founding the UN center for combating terrorism that should be a vocal point for academic research. In his turn Dr. Abdulaziz sager, chairman of the gulf research center has welcomed the GRM participants and makes mention that the GRC has made tremendous achievement materialized in organizing 86 workshops since GRM begins in 2010 and 1200 papers were presented. He points out also that participants from 86 countries have participated in the event that become held regularly at the university of Cambridge.

Stewart Lang from the university of Cambridge makes mention that there is a need to encourage research on the middle east in general and the gulf region in particular and pointed out that the gulf research center has made efforts to bring this gathering that become held annually. Dr. Bhgat Qurany from American university in Cairo has introduced the findings of the latest Arab human development report in which he concluded that the Middle East region suffers from three major deficits; freedom, education and quality. He calls to have a look on religious education so that we can combat the violence extremism that exacerbated in the region.

The participants have expressed their appreciation and admiration of the efforts that have been made by the Gulf Research Center in terms of organization, well preparations and arrangements. They have mentioned that the gulf research meeting that become held in Cambridge annually indicates that the Gulf Research Center plays remarkable role in advancing knowledge on the gulf region in particular and the Middle East region in general.

See highlights of the 2015 meeting here.

Workshops include titles such as:

The Gulf Cooperation Council and the BRICS

Higher Education in the GCC: Linkages and Independence 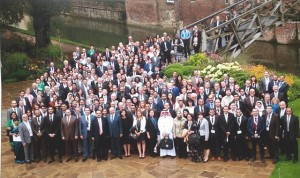 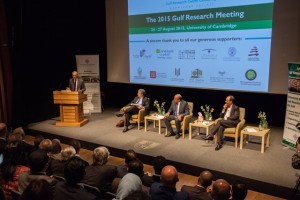