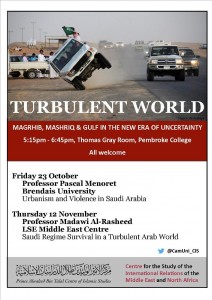 Friday 23 October
Urbanism and Violence in Saudi Arabia
Professor Pascal Menoret, Brendais University
Menoret is the author of The Saudi Enigma: A History and of Joyriding in Riyadh: Oil, Urbanism, and Road Revolt. An ethnographer and historian, he is interested in youth, urbanism, and political activism in the Arabian Peninsula and beyond. He earned his Ph.D. from the University of Paris 1 and was a postdoctoral fellow at Princeton University and Harvard University. He previously taught at New York University Abu Dhabi.

Thursday 12 November
Saudi Regime Survival in a Turbulent Arab World
Professor Madawi Al-Rasheed, LSE Middle East Centre
Please note this seminar has been cancelled.
Madawi Al-Rasheed is Visiting Professor at the Middle East Centre at LSE and Research Fellow at the Open Society Foundation. She was Professor of Anthropology of Religion at King’s College, London between 1994 and 2013. Previously, she was Prize Research Fellow at Nuffield College, Oxford. She also taught at Goldsmith College (University of London) and the Institute of Social and Cultural Anthropology, University of Oxford.
Since joining the Middle East Centre, Madawi Al-Rasheed has been conducting research on mutations among Saudi Islamists after the 2011 Arab Uprisings. This research focuses on the new reinterpretations of Islamic texts prevalent among a small minority of Saudi reformers and the activism in the pursuit of democratic governance and civil society. The result of this research project, sponsored by the Open Society Foundation Fellowship Programme, will appear in a monograph entitled Muted Modernists: The Struggle Over Divine Politics in Saudi Arabia (2015, Hurst & OUP).
In addition, Al-Rasheed published several articles in academic journals and edited volumes on Saudi Arabia’s political development since the Arab uprisings, gender policies, and current affairs. She regularly contributed to international television and print media, for example the Guardian. She appeared on Newshour (BBC), Radio 4 (Documentary on Saudi Arabia: Sand of Time), and interviewed by CNN, BBC World Service, CCTV, and al-Hura Arabic television. She continued to write op-ed in Al-Monitor and other media